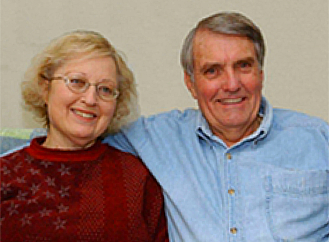 Benny was born in Clay County, Tennessee on June 16, 1932. After graduating from high school he worked in retail sales before entering the Air Force in 1951. He was trained as a Jet Engine Specialist and was stationed in Texas, Illinois, Wisconsin and Alaska. After being discharged he enrolled in Harding College in Searcy, Arkansas and graduated with degrees in speech and Bible. His graduate work was done at Harding Graduate School of Religion in Memphis, Tennessee.

The former Gayle M. Claunch from Dayton, Ohio, the daughter of an elder, became Benny's wife August 13, 1959. The Lord has blessed this marriage with five children and seven grand children. All are Christians who have reached the age of accountability. Gayle is a retired Art Teacher.

While at Harding Benny preached weekends at Shell Knob, MO and Coal Hill, AR. After graduation he served as pulpit minister for congregations in Coal Hill, DeWitt, and West Helena, Arkansas; Liverpool and Rome, New York; Park Avenue, Northeast and Franklin Road in Indianapolis, IN.

In 1985 Benny became a full time instructor with the Fishers of Men Ministry an continues to fill in at the Franklin Road Congregation when he is in town. His mission work has been in the South Pacific at American and Western Samoa. He can serve in two or three Gospel Meetings in between Fishers of Men sessions.

No schedule at this time.